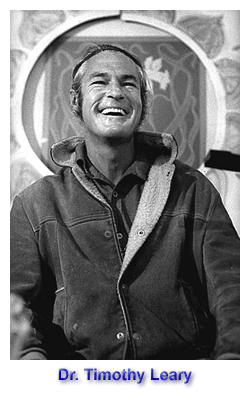 [NOTE: All quotations are by Timothy Leary.]

“For the last four or five thousand years, freedom and intelligence and individualism have been moving in an unbroken chain from East to West. So that here on the banks of the Pacific Ocean we obviously have assembled the most advanced nervous systems on the planet.”

“We all live within the reality bubble that our nervous system projects.”

“Neurology was the real revolution of the Sixties.”

“Your theory of evolution determines, really, what kind of a life you’re gonna lead.”

“The old theory, by old I mean the one they’re still teaching in your colleges, says that new speciation takes tens of millions of years to create a new species. Well if that’s so let’s go back to Quaaludes. Why bother?”

“The Sixties was a genetically designed and programmed paedomorphic revolt against adult authority.”

“It’s so simple, that to be in the right place you’re in the right time. Tune the place you are to the vibrations of the brain circuits that you want to activate at the time.”

“We didn’t grow from the apes. We refused to become apes.”

“I urge you, at all costs, to avoid terminal adulthood.”