[NOTE: All quotations are by Ethan Nadelmann.]

“The War on Drugs is a cancer in our society, in our American society and in global society.” 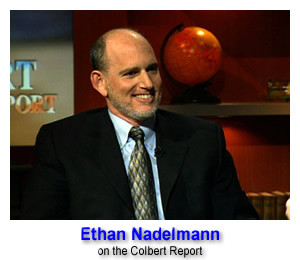 “The stand-bys, you know, the old faithfuls of tobacco and alcohol and marijuana and coca cocaine and opium, they’ve been with us for thousands of years in one way or another, and they’re going to continue to be part of our society and our lives, whether we like it or not.”

“We need to aim to cut America’s incarcerated population in half, to pick a rough number.”

“When you live in a society where one of the most powerful political forces is the organization which earns its livelihood from keeping its fellow citizens behind bars, I don’t know of any other free society in which that is the case. That’s a distortion.”

“I define recovery as getting to the point where your drug use, if you use drugs, is no longer impairing your life. … That’s the objective, to get on with your life.”

“It’s about accepting that each one of us, who have struggled with drugs, has to find their own path. And that the role of the state should certainly not be to get in the way and optimally to facilitate this.”

“That we are each sovereign over our own minds and bodies, that is the core principle that we have to keep putting out there.”

A New PATH
Parents for Addiction Treatment and Healing