“You don’t conquer time by building vast instrumentalities and seeking a primary particle and all that. The way you understand and investigate time is by moving inward, into metabolism. The human body is a knot in time.” 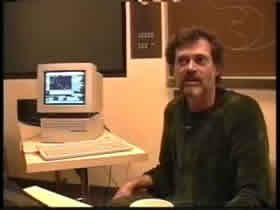 “I live in a kind of waking hallucination. I have a little aphorism which covers this. It’s: Rome falls nine times an hour. It falls more than that and less than that, but let’s say it falls nine times an hour. Well, then your job is to notice every time it falls. In other words, what we think of as our random musings and our personal mental furniture is in fact our subconscious awareness of these systems of temporal resonance operating around us.” [Comment by Lorenzo: I have no idea what he means by this.]

“I do entertain the idea that we may each have our own Timewave, sort of following the model of astrology.”

“What will happen, as novelty asymptotically increases, in the final months, hours, minutes, seconds is boundaries will dissolve, all boundaries They’re already dissolving. We see the nation-state dissolving, but wait’ll the atomic field dissolves.”

“It’s not a gravity collapse. It’s a novelty collapse. We are collapsing into a black hole of novelty.”

“I believe that the idea that is the most fun is probably the closest to the truth, and I find this idea to be absolutely delightful.”

“The whole thing [Timewave hypothesis] smacks of the impossible. It’s even pushed me toward the idea that maybe this is not actually a reality. We’re trapped, or I’m trapped. I don’t know if you’re trapped. But we’re in some kind of piece of fiction. It’s like a Phillip K. Dick deal, you know. We’re in some kind of simulacrum, and the clue to the fact that it’s a simulacrum is this impossible idea [the Timewave]. And so the point of the idea is not to believe it, but to use it as a wedge to fight our way out of this labyrinth and back to whatever reality we were in before we fell into this situation. Something like that.”

Dustin Cantwell’s
Fane of the Cosmos