“Culture is a simplification and a lie. It’s the currency by which fools navigate the world. Smart people get beyond it.” 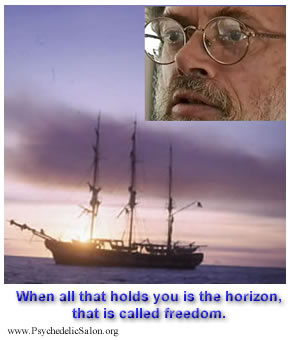 “If you aren’t ‘cool’ then you go to incredible lengths to achieve it by ersatz means, by buying $3,500 sunglasses and getting tattooed. But it can’t really be faked. But the whole engine of marketing is designed to make you think that it can be faked. I don’t know if I’m cool or not, but I am incredibly resistant to any effort to make me think I’m uncool.”

“You don’t want to become so open-minded that the wind can whistle between your ears.”

“It’s very important to hone intuition and logical razors so that reasonable questions can be asked. … This nobody ever criticizing anybody else brings the intellectual enterprise and the refinement of human knowledge to a screeching halt. The way in which the intellectual enterprise moves forward is by being critiqued, analyzed, subjected to tests.”

“Scientists really respect each other for proving that they are wrong. If you have a theory that you’ve defended for fifteen years, and then you publish a paper saying, ‘I’ve been over it again. I’ve looked at the data again, and you know what fellow colleagues, I botched it. I was wrong.’ They promote you for this. They say, ‘This is the essence of intellectual honesty.’ … Religion doesn’t work like this. In the religious domain you never admit you’re wrong. You further elaborate the story to save whatever preposterous notion has been exposed. … And so what you get is error based on error based on delusion based on illusion based on lie based on half-truth based on supposition based on somebody thought it would be nice IF.”

“Somewhere after the Sixties, when the government decided that universal public education only created mobs milling in the streets calling for human rights, education ceased to serve the goal of producing an informed citizenry. And instead we took an authoritarian model. The purpose of education [today in the United States] is to produce unquestioning consumers with an alcoholic obsession for work. And so it is.”

“If you turn cannabis into a Schedule I drug, a felony, suddenly all of these people who never felt inspired to dissent, never felt the heavy hand of the government, are automatically members of a criminal class. And what this does is thus radicalize the people so persecuted, and in a feedback loop of paranoia drive the government then into a frenzy of trying to understand and control this minority group. The idea that states of mind are matters for legal manipulation, it’s amazing that that discussion is even taking place in a democracy founded by Thomas Jefferson.”

“In the whole Marxist episode nobody was ever required to piss in a cup in the Soviet Union or Mao’s China to establish their loyalty to the government or the corporations, and yet that went down here with barely a murmur.”

“Once you find psychedelics there’s nothing between you and a complete check-out from your cultural heritage. The only cost to you is the complete abandonment of everything you’ve ever known and loved.”

“You can choose to be free, but it’s the last choice you’ll ever make.” –Kafka

[McKenna’s Five Percent Rule] “As long as any school of dissent remains below five percent of the population no money is budgeted to destroy it.”

“I think that no one is in charge, and this is a very good thing because it allows the internal dynamic of the situation to express itself. Everybody who wants to control the situation is fighting a loosing battle.”

“I don’t feel this need for intellectual closure. I don’t see why things should make sense.”

[McKenna’s Law] “As you advance in social hierarchy the percentage of smart people does not increase. … Every human situation is bedeviled by morons. No matter how high you rise you’re surrounded by fools, and you’re lucky if you’re not one of them. That’s the basic thing to guard against.”

“I think what’s happened is that the top of the culture, it’s profoundly intellectually bankrupt. There is no plan except to keep peddling stuff, basically until the forests are gone and the oceans polluted. It’s not malevolent. It’s simply that they are clueless.”