“Most software, I think, is written by freaks.”

“What it [investigating psychedelics] really requires is a love of the peculiar, of the weird, the bizarre, the étrange, the freaky and unimaginable.” 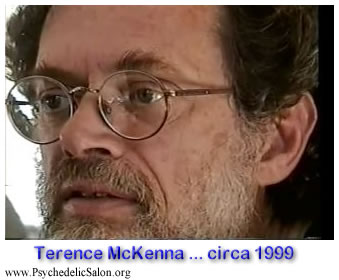 “Nature and the imagination seem to be the precursors to involvement in the psychedelic experience.”

“DMT seems to argue, convincingly I might add, that the world is made entirely of something, for want of a better word, we would have to call magic.”

“By manipulating queuing, by manipulating expectation, you can lead people to a fundamental confrontation, not only with themselves, but with the Other.”

“What I’m talking about is actually is the Mystery of Being as existential fact. That there is something that haunts this world that can take apart and reduce every single one of us to a mixture of terror and ecstasy, fear and trembling. It is not an idea, that’s the primary thing to bear in mind. It’s an experience.”

“Our theories are the weakest part of what we say. What we’re working from is the fact of an experience which we need to make sense of.”

“What we call three dimensional space, and what we call the imagination actually have a contiguous and continuous transformation from one into the other, … and THIS is big news!”

“If you play the cultural game, it’s like playing only with clubs or something, or playing only with the red marked cards. You have to play with a full deck, and that includes this pre-linguistic surround in which we are embedded.”

“Ultimately, I think, what the psychedelic experience may be is a higher topological manifold of temporality.”

“The mind is the cutting edge of the evolving event system.”

“I think the cybernetic matrix is a tremendous tool for feminizing, and radicalizing, and psychedelicizing the social matrix. I see computers as entirely feminine.”

“The ‘person’ is not an interchangeable part. The ‘citizen’ is. … The person is harking back to a pre-print model. It’s what the hippies were.”

“What people notice about [when they are on] LSD is either what’s right or wrong with themselves or how freaky the world is.”