[NOTE: All of the following quotations are by Timothy Leary.]

“By far, the number one problem facing our species for the last 25,000 years has been the relentless, ruthless, perennial, almost invisible oppression of women and children by armed men. And it starts in the home.” 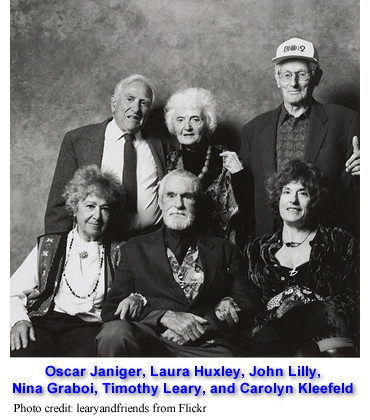 “The concept of a generation implies that young people are doing something different.”

“Hippies, to be honest, were not very hip, compared to the beatniks.”

“The function of the 21st century is to learn how to operate our brains.”

“The human brain is designed to design realities.”

“The way evolution, as I understand it, works is DNA, biological intelligence, Gaia wisdom, egg intelligence does not like final forms. … You’ll see the word ‘adult’ is the past participle of the word ‘grow’. In other words, an adult is someone who has stopped growing, and it is also someone who has reached their final form. And if there is one thing you can say about evolution, she does not like final forms.”

“There really is an awesome epidemic of deliberate stupidity that is laid upon us by the media, by the press, by magazines and so forth. They simply do not raise any of the issues that challenge our interests or intelligence.”

“I have one cause, and that’s the goal of the performing philosopher, is to encourage you, and inspire you, and empower you, to the extent I can, to Think for Yourself and Question Authority.”