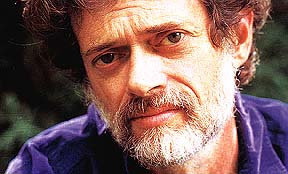 “In some ways, I think it can arguably be said that this is the quintessential work of art, or at least work of literature, of the twentieth century.”

“The reason I’m interested in it is because it’s two things, clearly. ‘Finnegan’s Wake’ is psychedelic, and it is apocalyptic/eschatological.”

“What I mean by psychedelic is there is no stable point of view. There is no character, per se. You never know who is speaking.”

” ‘Finnegan’s Wake’ is as if you had taken the entirety of the last thousand years of human history and dissolved all the boundaries.”

“Joyce, once in a famous interview, said that if the whole universe were to be destroyed, and only ‘Finnegan’s Wake’ survive, that the goal had been that then the entire universe could be reconstructed out of this.”

“It’s about as close to LSD on the page as you can get.”

“The character of life is like a work of literature. We are told that you are supposed to fit your experience into the model which science gives you, which is probabilistic, statistical, predictable, and yet the felt datum of experience is much more literary than that.”

“What all these people are saying, I think, and what the psychedelic experience argues for as well, is that we are somehow prisoners of language.”

“The purpose of literature, I think, is to illuminate the past and to give a certain guidance as we move into the future.”

“Somehow, complexity is the ocean we have to learn to surf.”

The Oracle Gatherings … June 2009 … The Fountain