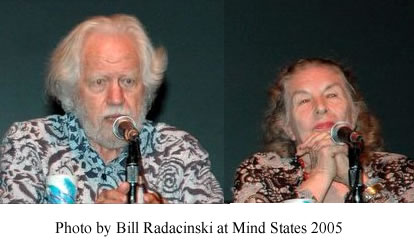 “I think it’s extraordinarily important, again, the context of set and setting that we use these drugs in, if we’re going to succeed in the Psychedelic Renaissance, is something that needs to be underlined again and again.” –Robert Forte

“I would say that, arguably, the oldest use of psychedelics in our Western culture, let’s say, is the Eleusinian Mysteries, which were a psychedelic drug ceremony that occurred every year for 2,000 years in ancient Greece.” –Robert Forte

“Personally, I think my most keen friend amongst the various phenethylamines and alkaloids I’ve worked with and synthesized has been 2CB. To me, it’s a vary favorable, warm, and very comfortable compound.” –Sasha Shulgin

[MDMA] is the most remarkable insight drug, and is a suburb tool for psychotherapy.” –Ann Shulgin

“Any drug, including MDMA, the most it can do is open up what’s inside you already.” –Ann Shulgin

“When I have not had a good psychedelic trip for, let’s say, six months, I begin to feel that I’m beginning to get out of balance. … I think that instead of regarding psychedelics as a drain on the system, frankly, they are my favorite vitamin. That’s the effect they have on me.” –Ann Shulgin

“And for all I know there are three, or four, or seven lives going on that I don’t remember either awake or asleep, but I feel consciousness is my living relationship with the world.” –Sasha Shulgin

“My belief is that when you get involved in a psychedelic experience you are in a communication with part of yourself that you’ve given up trying to communicate with or forgotten about communicating with. So it’s not something that’s imposed by a drug. It’s something [that is already there and] the drug allows you to experience and to function with. So I look upon it as being a revealing thing from within myself, rather than a thing imposed upon myself by an external drug.” –Sasha Shulgin

The Center for Cognitive Liberty and Ethics

“Ghosts I” from Nine Inch Nails

The first 9 tracks from the Ghosts I-IV collection available as high-quality, DRM-free MP3s, including the complete PDF.