[NOTE: All quotations below are by Dr. Timothy Leary.] 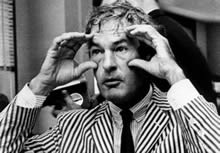 “As you well-know, I never wanted any credibility. I’m more concerned with incredibility.”

“I believe in change. I’m a change agent. I want to keep changing myself. … Change is going to be the norm from now on, and we’re not changing from A to B, we’re changing in an explosive, multi-directional way.”

“Yeah, there are forces which slow down change. Certainly, you are aware of the fact that every educational institution, from first grade up to the high altitude of The College of Marin, every institution that’s supported by taxpayers and administered by politicians is carefully designed to keep young people serenely and productively stupid.”

“Now they say that there was a counter-culture [in the Sixties]. There was no counter culture. This was a left-wing, partisan statement. There were 100 counter-cultures. There were as many counter-cultures as there were groups of friends and lovers meeting together to look into each others’ eyes and smile. That’s the point of the Sixties, there was not one orthodoxy being replaced by another orthodoxy. … You make your own world. Don’t blame your parents and don’t blame society. Figure it out for yourself.”

For the best drug information available online, be sure to visit Erowid.org.

The Emperor Wears No Clothes: The Authoritative Historical Record of Cannabis and the Conspiracy Against Marijuana