“I think disease is (and I don’t want to be held to this entirely, but) largely more linguistic than people think.”

“Nothing is unannounced. This is a psychedelic truth, I think, of some power. And it relates to disease, and it relates to shamanism. Nothing is unannounced. If you’re paying attention, stuff comes down the pike, first the little waves, then the medium-sized wave, and then the tsunami. But you have to be really not paying attention to be fully astonished by something unexpected.” 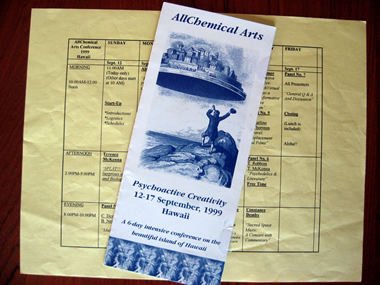 [In response to the possible evolution of artificial intelligence] “It’s going to put our metaphysical propositions to the test. In other words, if we believe that intelligence inclineith toward bodhisattva-hood, then the bodhisattva are on their way. If on the other hand, intelligence doesn’t incline toward bodhisattva-hood, then probably the house-cleaning of all time is on its way. Because when these AIs come to consciousness and realize what has been done to the Earth, and so forth, they may be very pissed, indeed.”

“Essentially what we’ve done is we’ve re-spiratualized the world, but we didn’t tame it.”

“It’s very interesting, how the re-animation of the world has been accomplished without ever understanding it. That you could pass through the reductive phase of science, return to a kind of archaic shamanism, and still not have a handle on what does it mean to be a being, what does it mean to be a human being, what is the nature of embodiment in the world? Somehow we got to this place without answering any of those questions.”

“Connectivity is the pre-condition for love.”

“My view of, let’s say, the last thousand years, is that it’s been pretty progressive. And, yes, we probably killed more people in the 20th century than in the 10th, but there was more regret about it, more soul-searching afterwards, more questioning ‘Why? Why did we do that?’ “

“People are not invited to live simple agrarian lives in devotion to their children and their estate. But instead they’re invited to fetishize, consume, believe, join, vote, buy, own, invest. And all of these things bleed energy away, and disempower, and make people not fully human, but rather participating cogs in some much larger mechanism which serves its own ends: The accumulation of capital investment, or the acquisition of land, or the propagation of the agenda of some political party, or something like that. Our human-ness is constantly being eroded.”

“The image I have of our community is, we’re like people in a dugout canoe trying to turn a battleship.”

“Sex on psychedelics is the Mount Everest of the experience.”

“If psychedelics don’t secure a moral community, then I don’t see what the point of it is. Otherwise we’re just another cult.”

“It’s always puzzled me how this community has never really understood its roots in American Transcendentalism, or why we never used that hammer against the establishment. Because this sort of secular-mystical-Theosophical brand of thinking is just as American as mom and apple pie, and yet you rarely hear it invoked by our people. And yet it’s where our roots grow deepest, with Thoreau, Emerson, Melville, Hawthorn. I mean, my god, these are the people who put together 19th century America.”