04:40 – Mark Pesce: “I knew that part of my own destiny as connected with virtual reality wasn’t to escape into another dimension but to find a way to make real to us the things that we can’t always see because we exist at a level of scale, of experience, that hides them from us.” 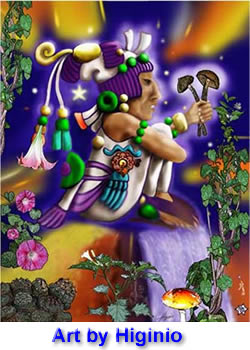 06:29 – Mark Pesce: “Because where we’re going, the simulated and the real are going to get really blurry.”

15:13 – Terence McKenna:“Obviously, from the first time I had a major [psychedelic] trip on it was clear to me that this had to have evolutionary implications.”

17:09 – Terence McKenna:“Whatever it was that psychedelics were doing, it was taking anybody’s notion of reality, anybody’s mindset, and radically extending it. And if they found that comfortable they were ecstatic. And if they found it horrifying they were traumatized. But the common thread was, takes ordinary minds, makes them bigger, stranger, more grotesque, less predictable, more bizarre.”

24:22 – Terence McKenna: “Our ideologies are probably lethal, obviously lethal I would say. But they are, fortunately, a kind of chrysalis of ideological constraint that technology is in the process of dissolving.”

27:16 – Terence McKenna: “Occasionally you flop on the seamy side. It gives a literary quality to life that’s lacking among the tight-assed.”

32:24 – Terence McKenna: “If anything undoes us this will be it, that our language has failed, that we misread each other’s intent, that we could not understand each other. So the project of refining language is the same project as the ending of history. I mean, history is the story of languages that failed, and when language grows perfect history will end.”