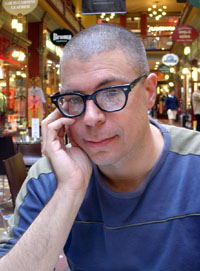 [NOTE: All quotations below are by Mark Pesce.]

11:35: “The singularity is how Terence’s idea of the Eschaton is working its way now into popular cultures through scientists.”

30:33: “The ability for you to react to your environment from your genetic code verses being able to react to your environment because you can communicate using language is probably at least ten million to one times faster. That means at the same time we acquired the ability to speak everything about us in terms of humanity, and human culture, and human thought, and human understanding suddenly went ten million times faster.”

47:22: [talking about nanotechnology] “The world we’re going to, the entire physical world, can now start to look a lot more like Legos that get snapped together at will. And if you think about the difference between building a castle out of sand and building a castle out of Legos, you’re starting to understand the difference that we’re about to be presented with in the material world. So at the atomic scale level of the material world is about to become linguistically pliable. This is an ability we have never had before.”

52:01: “It’s my belief, and I want you to prove me right, that the psychedelic community represents the authentic search for a middle path, because what’s happening in the psychedelic experience is that there’s a stretching of being. There’s a stretching of being that allows new forms of language and new ideas to enter. We all understand this intuitively because we come back from a psychedelic experience with some expanded sense of awareness, that we’ve been opened up to an understanding we didn’t have before.”