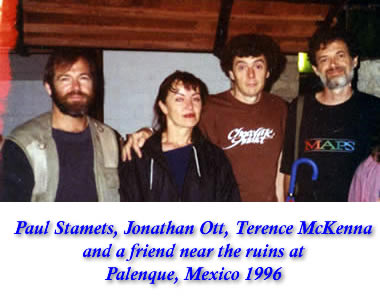 05:33 Terence begins with a discussion of “the felt presence of immediate experience.”

08:10 Terence McKenna: “The thing I like about the Zippy culture and the house, trance-dance, techno culture is that it’s about feeling. The combination of young people, drugs, a fairly sexually charged social environment, and syncopated music is just all designed to draw you into you and your friends and your scene, and your hood, and your place in the cosmos and not sell you out as a consumer to Hollywood, or Manhattan-manufactured forms of entertainment.”

10:01 Terence McKenna: “The culture is so capable of assimilating and disarming its critics through hype and fashion. I mean, I was horrified to see that ad, ‘Alan Ginsberg work kakis’. Did you see that!”

12:28 Terence McKenna: “What Rupert’s [Sheldrake] theory carries as an implication is what Prigogine now proclaims, which is, what we thought were eternal natural laws are simply something more like habits. Habits of Nature.”

28:57 Terence McKenna: “So, human freedom is the precondition for the assumption of man’s flaw, man’s fall. You know, what Thomas Aquinas called the felix culpa, the happy flaw.”

30:12 Terence McKenna: “A paradigm is a lens through which you see the world, and everything is transformed when you look through this lens.”

32:42 Terence McKenna: “If habit is to replace law, then the universe is more like an organism. It’s more like a creature. It learns, It gains experience. As it matures it changes its strategy. As it expands its experience it gains new domains of emergent subtlety.”

48:37 Terence McKenna: “What we call nature is a novelty-conserving engine, that what nature glories in is novelty.”

1:01:13 Terence McKenna:“And when you think about it, if you really believe in eternal laws of nature then you have a philosophical mess on your hands.”

1:05:35 Terence McKenna: “Mind is a phenomenon of metabolic activity. So far as we know, where there is not metabolism there is not consciousness.”

1:12:35 Terence begins a discussion about memes.

1:27:49 Terence McKenna: “We are very fortunate to live through an age of enormous reappraisal.”