Who is Fraser Clark?

From Pronoia.net
Fraser Clark is an elder Scottish zippy who was one of the first people to recognize the synergy arising from the “festi-rave crossover”, namely the merging of British New Age Travelers and Ravers under common repression and harassment from the British government.

A UK counter-culturalist since the sixties, Clark was publisher of the underground UK magazines Encyclopeadia Psychedelica international (EPi) and evolution^, in which he coined the term “Zippy”. Clark was also one of the creators of the club Megatripolis in London, the zippy hangout which, in its heyday, was known as the “hottest club in London”. Megatripolis was a pioneer of the “Parallel University”, the concept of offering live talks by philosophers, scientists and activists (along with supporting literature) to club-goers, set to ambient musical backgrounds.

Among his many other claims to fame, Fraser Clark led the great Zippy Invasionof the U.S. in the 90s. Here is what a writer on the Florida International University Web site had to say about the Zippies:

It stands for Zen-inspired professional pagans, according to 50-year-old Fraser Clark, shamanic zippie spokesperson, club manager and editor of Encyclopedia Psychedelica (EPi), the magazine that first identified the “hippies with zip.” According to EPi, a zippie is “someone who has balanced their hemispheres to achieve a fusion of the technological and the spiritual. The techno-person understands that rationality, organization, long-term planning, consistency and single-mindedness are necessary to achieve anything solid on the material level. The hippie understands that vision, individuality, spontaneity, flexibility and open-mindedness are crucial to realize anything on the spiritual scale.”

Zippies are an unlikely fusion between the two sides. They are the product of UK dance-scene hedonism, cyber street tech, pagan spirituality, postpunk anarchism, and go-for-it entrepreneurism. 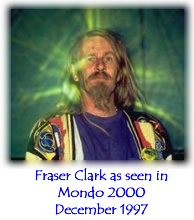 Along with a handful of old hippies in San Francisco, Fraser Clark has provided a continuous, and vital, link to the early days of the psychedelic community. He’s been an important part of the Tribe since it first started becoming aware of itself, and his exploits continue to amuse and amaze us all. To keep up with Fraser’s latest adventures, we recommend that you go to his Web site (DEFUNCT) and read the latest UP!, Fraser’s weekly (almost) e-zine. No matter where you are in the world, particularly if you are into the dance scene, you will want to read the UP! ( To get the UP! delivered straight to your IN-BOX each week, write to fraser@parallel-youniversity.com with “I WANNA GET UP!” in the SUBJECT box.)

Important Message
from Fraser:
the written version of this story has 3 LONG footnotes to help cover SOME of the large leaps i’ve inevitably had to make (some of the more mindblowing bits are in there).

For your convenience, a print-friendly version of those notes are available here.
You might find it useful to have a copy of these notes handy while you are listening
to this amazing story. [FULL TITLE] REVERSING THE ‘BIG LIE’THE TRUE STORY OF Monkey’s Marvelous Trip From The African Jungle To Inner & Outer Space A Short History of the Human Species