This program is another selection from the Timothy Leary archive. It features an October 23, 1990 debate at Penn State University between Dr. Leary and his arch-enemy, the scandalous G. Gordon Liddy. One of my favorite segments in this debate, which wasn’t all that polite at times, is when Leary pointed out the fact that he had spent more time in the U.S. Military service than Liddy had, but that Liddy had spent more time in prison than Leary had. 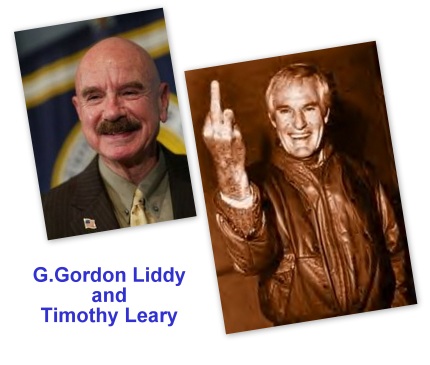 [NOTE: All quotations are by Timothy Leary.]

“My advice to you is: 1) don’t rely on politicians to solve you problems; 2) work to the fullest of your power to decentralize and to take power away from the central government in Washington, bring it back to the villages, to the cities, to the neighborhoods.”

“As far as this election is concerned, I urge you, don’t vote for either a Democrat or a Republican. It just encourages the bastards.”

MENTIONED IN THIS PODCAST