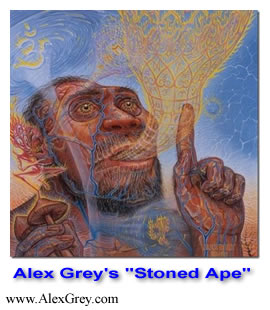 “What I think is going on is that probably language was entertainment long before it was meaning. It’s a kind of tuneless singing.”

“Sometime in the last 50,000 years, before 12,000 years ago, a kind of paradise came into existence, a situation in which men and women, parents and children, people and animals, human institutions and the land, all were in dynamic balance. And not in any primitive sense at all. Language was fully developed. Poetry may have been at its climax. Dance, magic, poetics, altruism, philosophy, there’s no reason to think that these things were not practiced as adroitly as we practice them today. And it was under the boundary-dissolving influence of psilocybin.”

“All the accoutrements that distinguish us from animal existence were put in place when we had a different kind of mind than we have now. We didn’t have a mind that favored role specialization, and male dominance, and anxiety over female sexual activity related to feelings of male ownership. That all came later.”

“What history is, essentially, is a careening, out-of-control effort to find our way back to this state of primordial balance.”

“We were essentially torn from the Gaian womb, thrust into the birth canal of history, and expelled sometime around the fall of the Roman Empire into the cold hard world of modern science, existentialism and all the rest of it.”

“The Germans take quite a knock for the holocaust, but the Catholic church manages to push more people into death, disease, and degradation every year than the holocaust managed in its entire show. And it’s thought rather crass to even mention the fact. It seems to me that as long as these Catholic bishops can show their face in public that we are in complicity with mass murder.”

“We need a pharmacological intervention on anti-social behavior or we are not going to get hold of our dilemma.”

“There has been no progress in 60,000 years in reducing the psychedelic experience to a known quantity. It is as terrifying, as awesome, as ecstatic, as irreducible to us as it was to them.”

“I believe that what makes the psychedelic experience so central is that it is a connection into a larger modality of organization on the planet, which is a fancy way of saying it connects you up to the mind of Nature Herself.”

“The only difference between a drug and a computer is that one is slightly too large to swallow. … And our best people are working on that problem, even as we speak.”

“I do not think that the government, under the guise of some phony, alarmist, pseudo-scientific rhetoric, should attempt to control the evolution of consciousness. After all, if these things truly are consciousness-expanding, it doesn’t take too much intelligence to realize that it is the absence of consciousness that is causing our flirtation with extinction and planetary disaster.”

“We don’t want this to end in a toxified garbage pit ruled by Nazis, which is the way we may well be headed.”

“It’s inconceivable that Western industrial capitalism could run on another five hundred or a thousand years. It will not continue as it has. It will deteriorate under the pressure of resource scarcity. And what few democratic values we have obtained, what little space for reasoned discourse has been created, will be the first to be swept away. So it’s very, very important that people take back their minds, and that people analyze our dilemma in the context of the entire human story from the descent onto the grassland to our potential destiny as citizens of the galaxy and the universe. We are at a critical turning point.”

“So what needs to be done is to spread the idea that anxiety is inappropriate. It’s sort of like we who are psychedelic have to function as sitters for society, because society is going to thrash, and resist, and think it’s dying, and be deluded, and regurgitate unconscious material, and so forth and so on. And the role then, I think, for psychedelic people is to try and spread calm.”